This is the fun part of the EQ. After defeating Double you will face the Profound Darkness and eliminate Darkers once and for all (meaning until they come back again o_o). 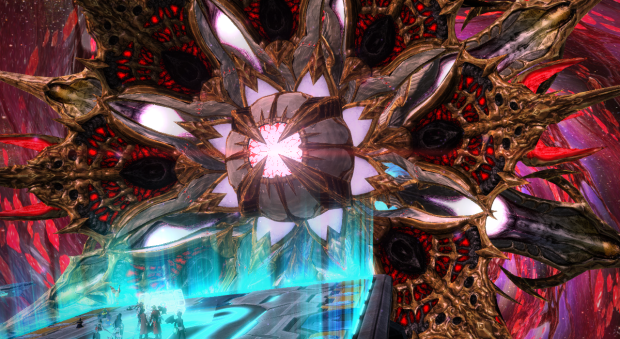 Profound Darkness has two forms to deal with. The first form has parts on its side you can break to reveal a weak point. His second form is a little more menacing looking. Near the end of the fight you will have a 1 on 1 face off with Persona and then finish off Profound Darkness. 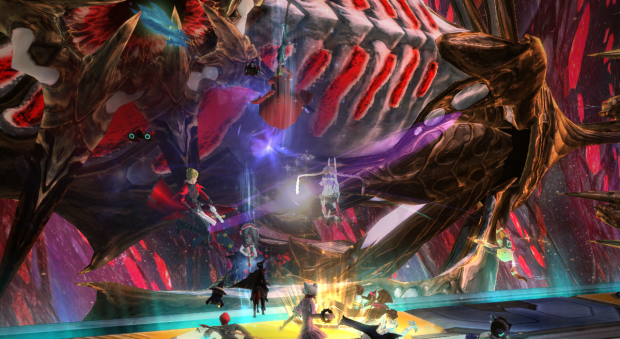 Profound Darkness will face you with his sides that have breakable parts. Each of these parts have their own attacks that can be kind of annoying. Breaking three of these parts will cause him to release orbs you can break.

They look like that thing with the red shiny part. If you break all these orbs in time, you reveal his weak point. After he pops out the orbs, he will always shoot a laser down the middle when he backs up the first time. If you don’t break them in time, he will line up the orbs in front of him. The orbs will become untargetable  and explode. Damage him by attacking the parts or the weak point.

Grabby Claw: This part is the one you should watch out for. One of its attacks has it swipe forward three times. The second one will have it target a person and then lunge forward and grab whoever is in the way. The grab usually kills people.

Flying Attack: Profound Darkness will fly back and then ram through the platform twice. You can switch to a Tech weapon to make dodging this easier. Just remember that he flies back and forth so he will cross the stage TWICE.

Beam Sword: Profound Darkness will make a beam sword and then slash across the stage. This can be dangerous because he can slash more than once. You can dodge this easily by going up or blocking while facing him.

Same thing as the last phase except he will use more breakable parts against you this time. Follow the same strategy as you did in phase 1.

He has a body now! Profound Darkness will have a whole new set of attacks. To defeat him, you want to destroy the floating orbs around. Destroying the orbs will have him reveal an eye on his chest.

This big eye likes shooting out stuff every now and then. Breaking the eye will stun the boss letting you attack the head. His hands are also damageable areas you can hit if you have trouble hitting the chest after he backs up.

Ground Slam: Profound Darkness will slam the center of the stage three times. He will always do this after the eye in the chest comes out. Stay away from the middle of the stage.

Satellite Laser: Profound Darkness will charge up energy while dragging everyone to the middle and then rain down lasers. This is easier to dodge than it looks. Get a running start and dodge right when the “pull” changes to avoid the first laser. Watch the floor to avoid the second, third, fourth lasers.

Shooting Stuff: In general, he just likes shooting things. It’s not really a big hit but a lot of little hits that kill most people. Move left and right while fighting to get out of the way of most of these.

Profound Darkness will back up and you will have a 1 on 1 fight with Persona. This fight can be a little hard for people that have to stand still. Use mobile attacks to make this easier. If you don’t kill Persona in time there will be a party wipe. You will know it is coming when two orbs pop out next to Persona and start spinning. You can save a photon blast and hold onto the photon blast button to dodge this.

Over End: Persona will make a giant Over End sword and slash down. Its damage is big enough to kill most people so avoid this. The sword is straight, so just step to the side.

Satellite Laser: Persona shoots down lasers. These will stun you and Persona usually follows up with an Over End. Just stay out of the dangerous looking circles.

Energy Orbs: Persona throws two energy orbs at you. They travel fast and knock you around. This attack is why Persona is a pain for immobile classes. Either dodge them or use Massive Hunter or some super armor to ignore them.

This phase is a little different depending on if you wiped or not. If you defeated Persona, Profound Darkness will pop out an eye on his face and shoot lasers. The safest place is right in front of the eye (yes it looks scary). Destroying it will let you attack his actual weak point and defeat him.

If you failed, Profound Darkness will repeatedly do a ground AoE across the stage. You want to stay in the air and destroy the orbs floating around to stun him to make hitting the face easier. Staying on the ground is kind of dangerous.

Like Double, there aren’t a whole lot of speed killing type stuff to do because of HP thresholds. There are some tricks you can do though. Also, be nice and cast Resta every time Profound Darkness repositions to keep your party happy. These strategy tips will work for parties with high enough damage.

Profound Darkness’s final form is a lot easier if you focus your burst on breaking the eye instead of damaging him when he is stunned. Have your burst ready for when the eye pops out and your party should be able to take it out before he finishes his ground slam attack.

During the Persona fight Weak Bullet and Chain Triggers are shared. You have a few seconds to get some big hits in when he spawns. Try using some fast hitting PAs after the real fight starts. Other than that, watch out for lasers and Over End. Go celebrate your hard earned victory. 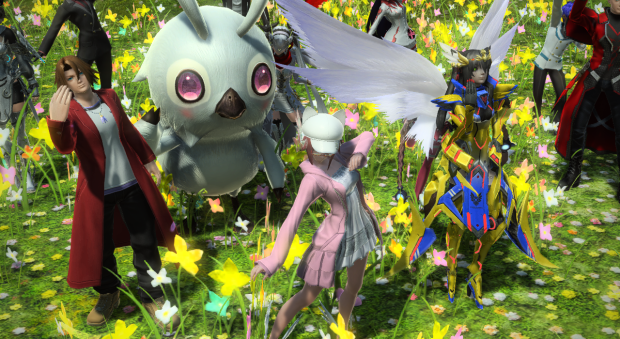